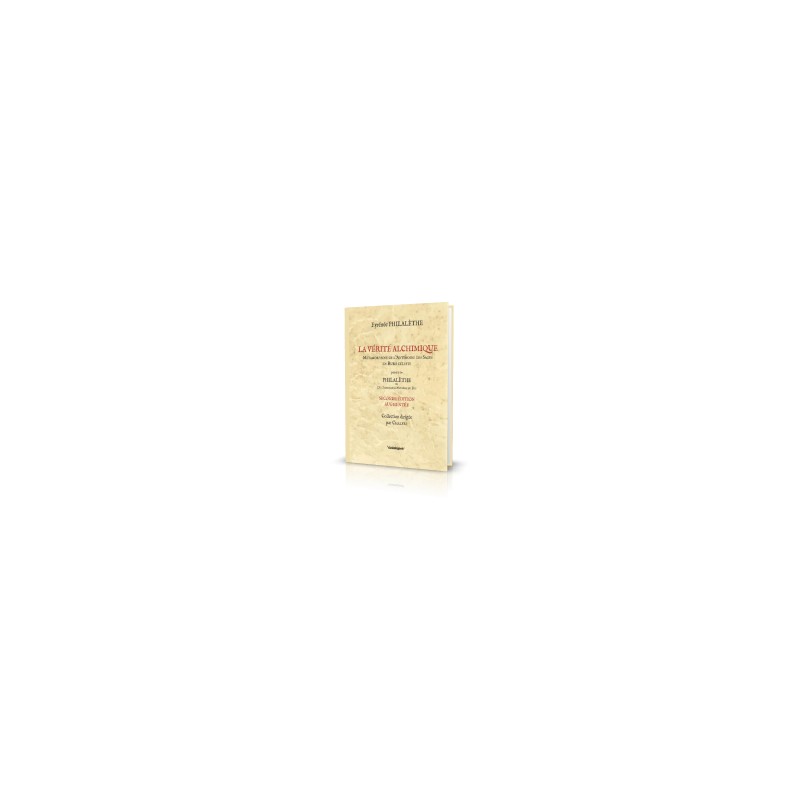 It’s to the age of twenty-three years whom an anonymous and British alchemist, which had clothed the name of Eyrenee Philalethe, led to his fortunate end and by the dry way, the strenuous quest of the Philosopher’s stone. This unheard of success, rather happened during an age precocious and related into the Introitus apertus published in 1667, at London, was favoured by a manly spirit, original, of very energetic sharpness, similar in power and swiftness at this one whose Lulle, Villeneuve, Bacon, Valentin and the sententious or unsubdued Paracelse enjoyed themselves. In spite of undeniable valour of this treatise, the most virulent contemners of the Alchemy seized of this ingenuous confession to list it like a sophistical work, and to give up through it in a constant discredit of the Art and metallic transmutation.

Allow us to remark to you that in this peculiar area, the Donum Dei represents a liberality of the Heaven, which is unintelligible to our understanding and by essence. Only the being called and touched lightly by this mercy, knows he is distinguished and hallowed on the superior grade of the awakening, in relation to layman still entirely bound into this primordial condition, firmly incarcerated by the heavy links of the lethargy. In other words, it’s through this radical Transmutation of his own spirit into spirit of universality, that his being reaches into the effective mystic of the Adept and at the imprescriptible responsibility, which in future is his own.

Indisputably, the study of the alchemical works of Philalethe reveals whom he was initiated very early into the hermetic Philosophy. Not for get in the details, which he was forged in the bosom of a stock or filiation out of which came up the charitable Trévisan and the herald Alexander Sethon, the aforesaid Cosmopolite. All right his spiritual masters, with whom he obtained the best support or springboard propitious to the so much precious hatching of his genius. Besides, he showed oneself like a prolific writer, seeing that seventeen works published between 1654 and 1695, are officially imputed to him. Still other thirteen are nowadays unpublished. Into this traditional index, henceforth it will have to add eight manuscripts mentioned in due place, whose Expositio in Aurum potabile sapientæ ; Ænigma redivivum Paracelsi veritatis Sali ; Experimenta in Menstruum magnum. About from which, formerly we have got the uncommon preference of a substantial and managed analysis.

He was sixty-six-year old, in all probability in the year 1688, which Philalethe began the writing of a special treatise, towards the future generations. Secretly informed whom no disciple could attain to the understanding and solution of the major Arcanum, to the generation of the secret Fire, universal Solvent or philosophical Mercury, which only conducts to the Medicine so coveted. And although he had discoursed with much of ingenuousness it, into some published and very instructive works, like were Introitus apertus, Experimenta de præparatione mercurii sophici et Medulla alchimiæ. Our wish to open yield an original work of Philalethe, could not turn one’s attention to another treatise that now this one.

Therefore, some edifying lights are offered, concerning the essence of the authentic wise men’s Subject, the exam of the crude substance, which is the allowed Source by the nature and according to the unanimous advice of the philosophers, to the generation of the genuine Mercury. Which he veiled, as for him, under the attributes of martial Antimony and celestial and antimonial Steel. Just as his solution and canonical elaboration, solely fit to take away it every residual impurity and vitriolic acrimony. And like his ultimate calcination or coagulation, promoting the genuine and human Medicine, the digestible Gold, and the Stone of throwing. And some clear answers concerning a few questioning, which always were remained in suspense, about his philosophical way of Adept, the narrow club of his acquaintance and the mobile of his travels in America.

Through this edition, we pay tribute and do Philalethe justice, at which fully he merits, to have undertook during his existence the investigation, collect, writing and conveyance of the monumental and hermetic Mass of labour. Finally, meaning the philosophical Legacy of the western Tradition, edified on several millenniums. He had the acute consciousness that the elements which established the Europe’s Soul for still a few times, resulting from the very subtle compound of human tempers, knowledge and yearnings, which had enabled at the miscellaneous tribes and native people in the course of their history, to meet and to erect some sound and determined nations, was little by little expurgated of the men’s memory because of the immoderate pride of new and philosophical chemists. Through them, a young and social humanism however uncompromising and atheistic, interfered into the civil societies and dogmatised them. Since it don’t had as one’s ambition other than the institution of a civilization with worldwide, progressive and scientific characteristics, established on the only mechanistic assumption. And fit in pursuance of his conception, to explain entirely the fundamental essence of every thing, to bring back it to the intelligibility or to his triumphant reason, and actually to facilitate it his exploitation.

For us, these motives make to sit down Philalethe at the place, which returns to him in due. All right on the top of the hermetic Art, to have been the ultimate Peer of the invisible Areopagus of the western Adepts, relating to second millennium and to show oneself, astonishingly nowadays, the precursor of this dawning third. And as regards this renewed times, whose Cosmopolite gave some charitable echo.